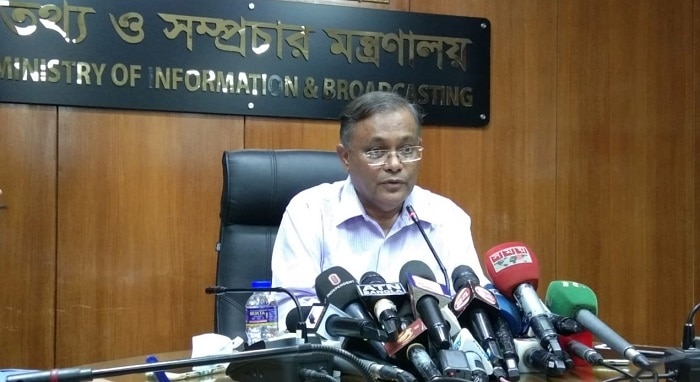 Information and Broadcasting Minister Dr. Hasan Mahmud yesterday said the BNP doesn’t stay with people during any disaster, rather they always exaggerate.

“BNP leaders are only delivering speeches and exaggerating sitting idle at their Naya Paltan’s party office and talking tall talks in front of Press Club. But they are not with flood victims”, he said.

The minister told the reporters at the meeting room of his ministry at Secretariat in the capital.

Mentioning the politics is for people’s wellbeing and for service of the country and society, he said the Awami League leaders and activists are with flood victims from the very beginning as per Bangabandhu’s daughter’s directives and even sacrificed life.

Hasan said, “BNP leaders weren’t beside the countrymen during the COVID-19 pandemic. Our party (Awami League) leaders and activists stood beside the people and distributed relief items and health materials. For this, five AL central leaders including Cabinet members, even, advisory council members and lawmakers died.”

But, he said, BNP didn’t stay beside the countrymen as they did only photo sessions.

“Before eight to ten days ago in a Cabinet meeting, the premier forecasted flood. She is not meteorologist. But she told this with her common sense. And later, the country witnessed over 1000 millimeters rainfall in a day,” he said.

In the beginning of the flood, the premier asked the administration to stay beside the flood victims and called out the army, the minister said.

The prime minister also gave directives to her party leaders and activists to be with the victims, he added.

The minister said the AL leaders and activists stood beside the flood victims along with the administration though they are also marooned.

The related news is also being aired and published by different mass media, he said, adding, even, one Chhatra League leader died.