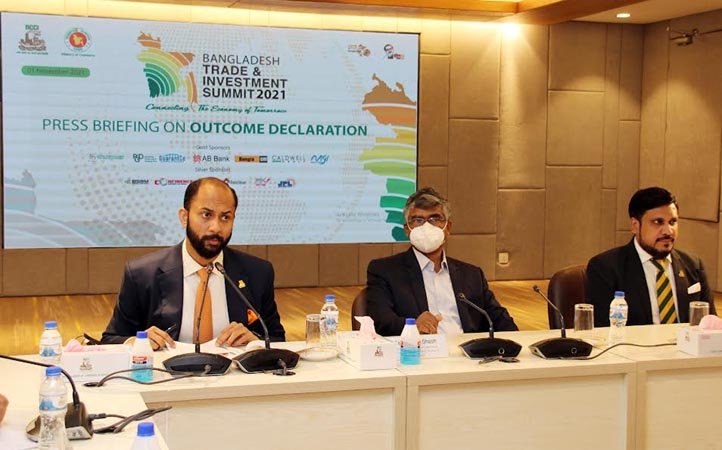 Entrepreneurs have shown their interest of US$1.16 billion investment in the weeklong ‘Bangladesh Trade and Investment (BTI) Summit 2021‘.

The information was revealed yesterday, the concluding day of the summit, at a press conference on the outcome declaration of the summit at Dhaka Chamber of Commerce and Industry (DCCI) auditorium in the city, said a press release.

Ministry of Commerce and DCCI jointly organised the summit from October 26.

But averaging duty structure on both sides is a critical thing before signing FTA but the government of Bangladesh is working on this matter, he added.

Rizwan Rahman in the outcome dissemination presentation said that during the summit there were 369 Business to Business (B2Bs) attended by 552 local and foreign companies from 38 countries where potential investment interest size was US$1.16 billion.

Twenty companies from 13 countries showed their interest to do joint ventures and 26 products have been identified as potential for export from Bangladesh, he added.

He said there were few sectors like infrastructure, pharmaceuticals, baby bottle, umbrella, agro and food processing and Information Technology (IT) from five countries that showed their interest for direct investment in Bangladesh.

He also said that in different sessions under this summit, speakers underscored the need of improving in ease of doing business, policy reforms, technology adaptation, skill development, fiscal and non-fiscal incentives, strong economic diplomacy and signing FTA or PTA with potential trading partners.

Bangladesh has the ability to grab the huge opportunity from African, Asia and Pacific and Middle Eastern countries in terms of inward or outward investments, he added.

Rizwan Rahman said the most important thing is to enhance our export competitiveness in the global market after the LDC graduation. Bangladesh is already the member of some regional blocks like South Asian Free Trade Area (SAFTA), Asia Pacific Trade Agreement (APTA) and D-8.

However, the DCCI president said the country needs to go for PTA or FTA with other major trading partners.

It came out of the summit that Bangladesh has also a large consumer market, so local market resource mobilization and tariff rationalization are also important, Rizwan Rahman pointed out.