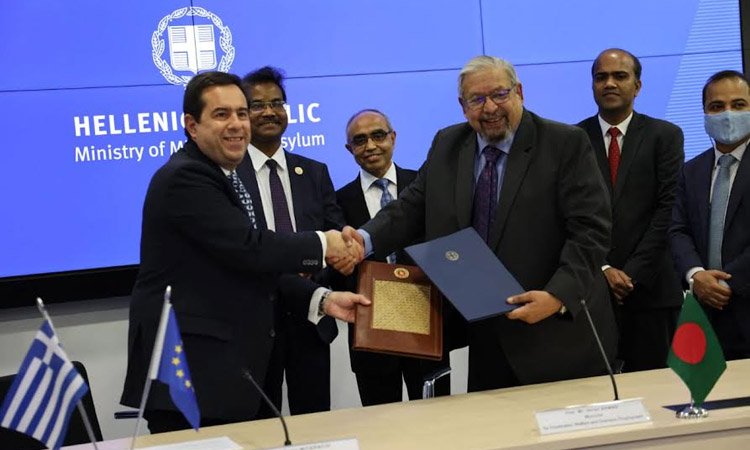 Bangladesh and Greece have signed a letter of intent to bring safe migration and workers legally.

In Athens, yesterday afternoon, the Minister of Expatriate Welfare and Overseas Employment of the Government of Bangladesh Imran Ahmed, MP and Minister of Immigration and Asylum of Greece Notice Mitaraki signed a letter of intent to increase cooperation in safe immigration and legal migration, according to a statement received in Dhaka.

At a bilateral meeting held at the Greek minister’s office, the two ministers spoke out against irregular migration and agreed to strengthen labor migration in a systematic way.

Referring to Greece’s historically friendly relations with Bangladesh, the Minister for Expatriate Welfare and Overseas Employment said the Bangladesh government has a solid legal and regular migration position. If there is an opportunity to recruit workers from Bangladesh to Greece through legal channels, the tendency of illegal migrants will decrease, which will benefit both countries.

He emphasized the need to sign a Memorandum of Understanding (MoU) between the two countries to create employment opportunities for various professionals, including workers from Bangladesh, through legal channels in Greece.

The Greek Minister for Immigration and Asylum said that there is scope for mutually beneficial cooperation between Bangladesh and Greece, and his ministry is working towards this end. He said that discussions would continue on the issues raised by the Minister for Expatriate Welfare, including the problems of expatriate Bangladeshis and legally bringing workers.

The Greek minister assured the Bangladeshi delegation that Greece would soon sign a memorandum of understanding with Bangladesh to strengthen regular labor migration.

Iran is committed to defending the nuclear deal

Air force bombing in the town of Togo in Tigre