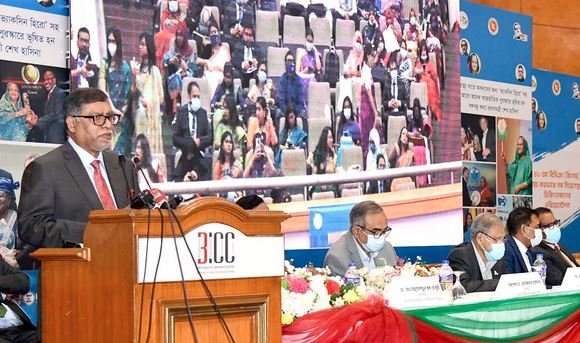 “We have been able to control three waves of coronavirus due to multiple initiatives including expansion of vaccination programme,” Health Minister Zahid Maleque told a function at Bangabandhu International Conference Center (BICC) here, an official release said.

As a result of the sincere efforts of the government, Bangladesh has emerged as a successful country for controlling the spread of the deadly virus, he added.

“We have set the day-long nationwide campaign that began at 8am yesterday morning aiming to vaccinate one crore people but we have extended the drive for two days to bring all eligible people under first dose of vaccination coverage,” the health minister added.

“A total of 12,07,56,056 people have so far been administered the first dose of COVID-19 vaccine till February 26 while 8,27,54,951 received the second dose across the country during the same period,” according to the data of Management Information System of Directorate General of Health Services (DGHS).

As many as 36,33,681 people have so far received the booster dose of COVID- 19 vaccine to prevent the spread of the deadly virus, it added.

Some 37,585-floating people across the country have so far received the first dose of vaccine.

Of the total vaccination doses, 1,11,74,725 people received the first dose of coronavirus vaccines on the first day of the campaign while 8,15,073 received the second dose and 73,855 received booster dose during the same period, the DGHS added.

Bangladesh secured 10th position in the vaccination programme and the ongoing mass vaccination campaign will push the country into a new feat covering fully unvaccinated people to fight the COVID-19, the health minister said.

“We hope that we will create a milestone of success in administering coronavirus vaccines to a huge number of people during the three-day drive,” he added.