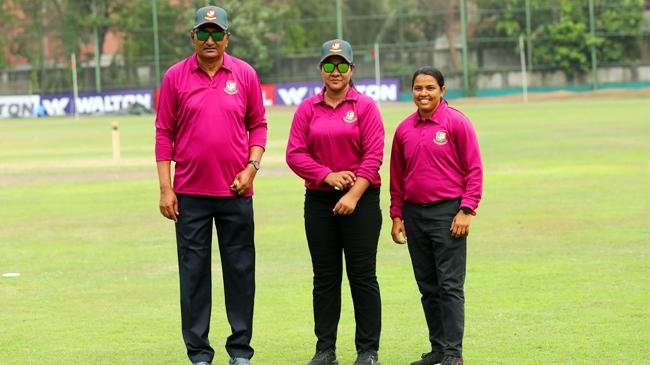 Bangladesh women umpires made their presence in cricket field with the traditional Independence Cup, which is held every year to mark the country’s Independence Day.

In doing so, she opened a new chapter in Bangladesh cricket on a day when Bangladesh emerged as an Independent country in 1971.

“The women umpires had already officiated some of the matches in our country but no one knew about it,” Jessy said here after officiating the match.

Another women umpire Dolly has been officiating matches since 2009, specially in divisional sport, which hardly anyone knows.

“Last week, I told Mithu bhai (Iftikhar Ahmed Mithu, the chairman of Umpires Committee) that I would like to officiate the Independence Cup match. Because no one would have known if I started umpiring from another place,” said Jessy, who completed her umpiring course along with other women’s cricketers in 2009.

She hoped that the BCB will give the women umpires an opportunity to officiate a good number of matches.

“In the country like Pakistan, the women umpires officiate the matches regularly but here we don’t get enough chance as of now. Now when everyone knows about Bangladesh’s women umpires, thanks to this auspicious day, I hope, we’ll get a good platform.”

In reply, Bangladesh Green were bowled out for 195 in 18.5 overs. After the top and middle order batters failure, No.9 batter Jamal Babu struck 62 off 20 with six fours and five sixes to help the side edge closer to 200-run mark.

Mystery behind killing of AL leader Tipu to be unearthed soon: HM

The Prime Minister inaugurated 50 model mosques across the country today