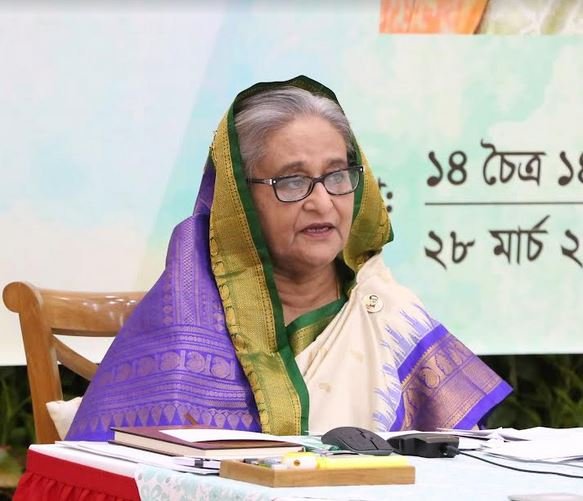 Prime Minister Sheikh Hasina yesterday called the sanction against some Rapid Action Battalion (RAB) personnel “a very condemnable act”, saying the elite force has a great contribution to contain militancy and terrorism in the country.

“They (USA) protect the criminals and shelter them in their country and give sanction in our country without any crime. And this is their character, so what else I can say about them,” she said.

The premier said this while addressing a function as the chief guest marking the 18th founding anniversary of RAB, joining virtually from her official Ganabhaban residence here.

The elite force organised the function at the Lt Col Azad Memorial Hall at its headquarters in city this morning.

Each of the 15 battalions of the RAB got connected to it virtually.

Sheikh Hasina said the USA gave shelter to the war criminals and self-confessed convicted killers of Father of the Nation Bangabandhu Sheikh Mujibur Rahman and provided them citizenship.

The prime minister said her government has appealed time and again to their Justice Department to send back the murderers, who killed women and children along with Bangabandhu on August 15, 1975.

Instead of sending them back, she said they have given shelters to them in their country.

Sheikh Hasina said her government has taken legal action against any law enforcement agency member, RAB or police if they are found involved in any criminal act.

But this is very unfortunate that they, who sanctioned against some RAB personnel without any reason, do not take any legal action against their force if it does any crime, she added.

Referring to killing a child by shooting and a person by trampling under boots in the USA, she said if any member of law enforcing agencies commits crime in the name of maintaining law and order, they do not take any step.

“Bangladesh is only a place in the world where action is taken if any one commits crime,” she added.

The prime minister said she did not know whether they (USA) were hurt at the success of the RAB in containing militancy and terrorism that included the Holy Artisan Cafe attack.

She said the disgraceful matter is that some people of Bangladesh have been conducting propaganda against the country.

“They’re the criminals. They have either lost their jobs or left the country after committing crime,” she said.

The prime minister however called upon the RAB personnel to discharge their duties in accordance with the law.

Referring to hoarding of essentials ahead of the month of Ramadan by some unscrupulous black marketers, she asked the elite force to remain vigilant against any sorts of stockpiling despite the law enforcement agencies have been conducting drives to check it.

The prime minister instructed the RAB personnel to intensify the drives against illegal drugs despite they have success to this end in line with the government’s “zero tolerance” policy against it.

She asked the force to continue the drives until the menace is rooted out of the society.

Referring to influx of Rohingyas in Cox’s Bazar and increasing trend of crimes there, she said they have planned to establish a full-fledged battalion of RAB in the district.

PM suggests eye treatment for those who don’t see development

Mastermind behind the assassination of Bangabandhu will unmasked one day: PM

President called upon all including armed forces to work against Corona