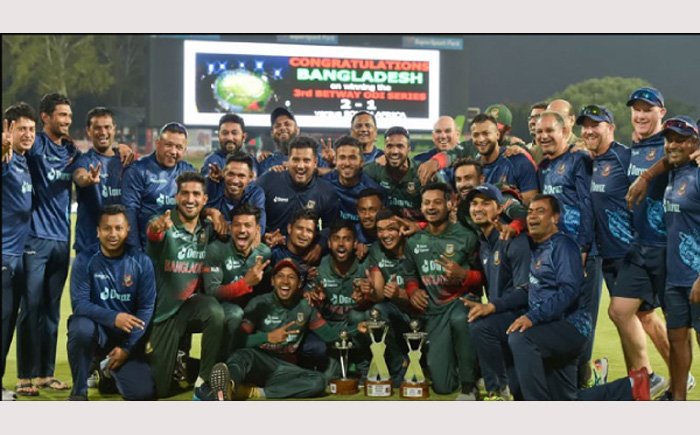 Bangladesh got the reward of their historic ODI series victory in South Africa as they moved to No. 6 in ICC ODI team rankings.

The outcome was confirmed after Pakistan’s defeat to Australia in the first ODI game by 88 runs at Lahore yesterday.

This was the second time; Bangladesh broke to the No.6 position in ICC rankings, having previously reached this position in 2017.

The Tigers could have reached sixth position during their ODI series against Afghanistan at home. But due to their defeat in the last game in three-match series, which denied them to inflict a whitewash on Afghans, Bangladesh failed to grab this position.

At this moment, both Pakistan and Bangladesh have 93 rating points but by a fraction of point, Bangladesh are ahead of the subcontinent rivals. If Pakistan loss this home series to Australia, Bangladesh’s position will be further bolstered.

Meanwhile, Shakib Al Hasan jumped up four spots to No. 8 in ICC ODI bowling rankings, while fellow countryman Taskin Ahmed jumped up 15 spots to No.33, with the latter having returned 5-35 in Bangladesh’s dominant nine-wicket win over South Africa last week. Kagiso Rabada meanwhile, has slipped from No.8 to No. 13.

Tamim Iqbal jumped up to No.20 in batting rankings, while Quinton de Kock slipped a spot to fifth, being overtaken by Rohit Sharma. Imam-ul-Haq’s valiant hundred on Tuesday has helped him return to the top 10.

Pranab Mukherjee to be remembered for his support and love for Bangladesh: PM