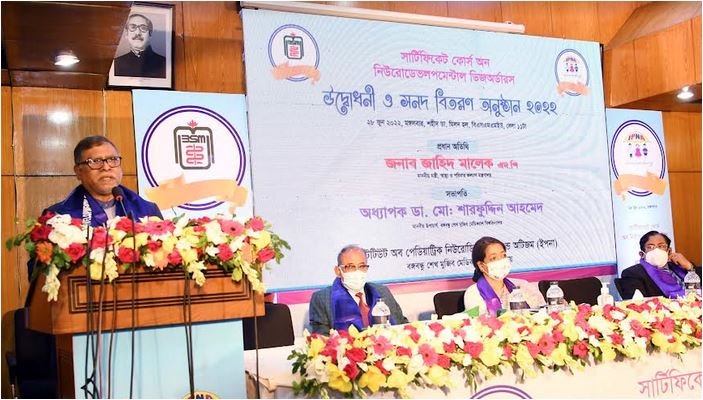 Health Minister Zahid Maleque yesterday said children aged between 5 and 12 would be administered vaccines to protect them COVID-19 infection.

“We have taken the decision to inoculate children aged 5 and 12 years with COVID-19 vaccines after approval of the World Health Organization (WHO)…. The country has sufficient number of vaccines, which are eligible for children,” he told a function here, an official release said.

The function was held at Bangabandhu Sheikh Mujib Medical University (BSMMU) in the city.

Maleque said, “There are 2.20 crore children aged between 5 and 12 in the country. Registration is mandatory through Surokkha app for receiving COVID-19 vaccine.”

“Since early June, the infection rate of coronavirus has been increasing sharply…. now the country is witnessing a rising trend of the deadly virus,” he added.

The health minister said Bangladesh has become a role model for controlling coronavirus as the country successfully handled three waves of the deadly virus.

“When almost the entire world was struggling to combat the lethal virus… we have taken multiple measures under the leadership of Prime Minister Sheikh Hasina to protect the lives of the people from the disease,” he added.

The health minister said Bangladesh secured fifth position in the world for its success in combating the highly contagious virus while the country attained top position among the South Asian countries.

On November 1, 2021, the vaccination campaign for students aged between 12 and 17 began at eight centers in Dhaka city.

A total of 27,72,46,485 doses of Covid-19 vaccines including booster dose have so far been administered as the countrywide vaccination campaign was launched on February 7 last year.