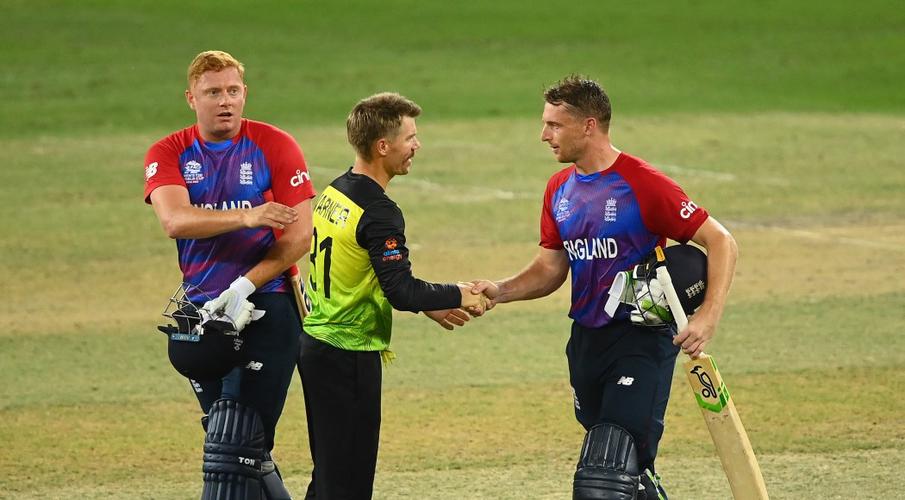 Jos Buttler’s unbeaten 71 and inspired bowling by Chris Woakes powered England to an eight-wicket over Australia and close in on a semi-final spot at the Twenty20 World Cup on Saturday.

Buttler put on an opening stand of 66 with Jason Roy, who made 22, as England romped home to their victory target of 126 in 11.4 overs in Dubai.  Buttler smashed five fours and five sixes in his 32-ball knock to drive England to their third successive win in the Super 12 stage.

Woakes and Chris Jordan shared five wickets between them to help bowl Australia out for 125 after they elected to field first.

Woakes sent the dangerous David Warner trudging back to the pavilion, caught behind for one, to signal his intent after England elected to bowl in the Super 12 contest in Dubai.

Woakes then removed Glenn Maxwell and returned figures of 2-7 from his first three overs of excellent seam bowling and in between took a superb catch to see off Steve Smith for one.

Fellow quick Chris Jordan (3-17) returned impressive figures of 3-17 to flatten the Australian batting despite a fighting 44 by skipper Aaron Finch.

Australia fell to a precarious 51-5 after leg spinner Adil Rashid trapped Marcus Stoinis lbw for nought and Liam Livingstone claimed the wicket of Matthew Wade, for 18.

Finch counter-attacked as he took on Tymal Mills and Jordan for a few boundaries.

He put on 47 runs with Ashton Agar, who made a run-a-ball 20, to give some respectability to the total.

The left-handed Agar hit two straight sixes off Woakes’ fourth over but fell to Mills while attempting another big hit.

Jordan came back firing to dismiss Finch and Pat Cummins, who had the first two balls of his three-ball stay over the fence, on successive balls. Adam Zampa avoided the hat-trick.

Mills gave away 45 runs from his four overs but got Mitchell Starc out on the final ball of the innings to bowl out the Aussies.

Agar had Dawid Malan caught behind for eight with his left-arm spin but the wicket proved only a minor bump on England’s road to victory.

Buttler kept punishing the bowling, raising his half-century with a six. He had Jonny Bairstow, who hit the winning runs, for company till the end.

England stay top of group 1 with six points ahead of Australia and South Africa, who edged out Sri Lanka in the first match of the day.

Bangladesh makes a place of ‘trust’ in world in ICT: Kamal