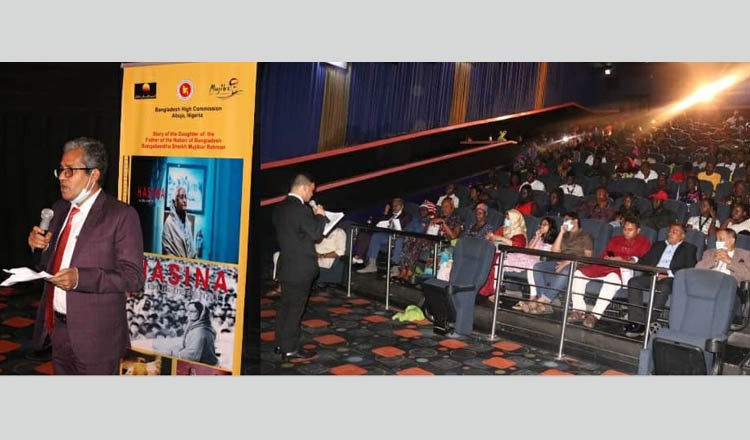 ‘Hasina: A Daughter’s Tale’ continues to win over audiences across the world with its truth-stranger-than-fiction storyline, Nigeria being the latest in line.

The documentary recreating the unique story of tragedy and hope after the murderous 1975 Bangladesh coup was screened at the 12th edition of the International Zuma Festival in Abuja (Nigeria) on Thursday.

A large crowd including Nigerian dignitaries and foreign diplomats watched and applauded, many visibly moved by how a housewife (Sheikh Hasina) battles arduous challenges following the massacre of almost her entire family to script an amazing turnaround for not only her father’s party but also launch the country on the road to economic growth.

In a way, Nigeria has had its share of coups and assassinations, like Bangladesh and many other Third World countries in the post-colonial world. So, the Daughter’s Tale is easy to relate but what many in the audience found inspiring was the story of the turnaround and Hasina’s continuous struggle to reclaim her space. It is a story of struggle, sacrifice, and passion for service, said Dr. Chidia Maduekwe, CEO/Managing Director of Nigerian Film Corporation.

Prime Minister Sheikh Hasina has been continuing her father’s legacy and passing it on to the next generations, he added.

Echoing his tone, Steve Eboh, renowned Nigerian Film Director and Film Producer, maintained that the docudrama was a combination of emotion, picture, sound, perfect production, and a wonderful story.

Earlier, the docudrama, directed by Piplu Khan and produced by CRI Trustees Radwan Mujib Siddiq and Nasrul Hamid, was screened at the 51st International Film Festival of India, organized in Goa. It also moved the audience at the Third Bangladesh Film Festival in Kolkata.

The film left a lasting impact on youths as it pieced together an array of real-life events seemingly impossible to fit in one single life. They include receiving the news of the assassination of one’s family and father, getting access denied to the very country whose freedom owes to her father, drumming up public support to reclaim her space against military dictators and anti-liberation elements. The list even goes on to surviving a dooms-day-like grenade attack and navigating the country back to the path of progress and development.

The docudrama was dubbed as an inspiring one by women as it recreated the story of a lady’s turning around from the life’s worst challenges.

AL always assumes power through vote, not by backdoor: PM

PM returned after his visit to Maldives

Warning signal 3 is in force at the seaport