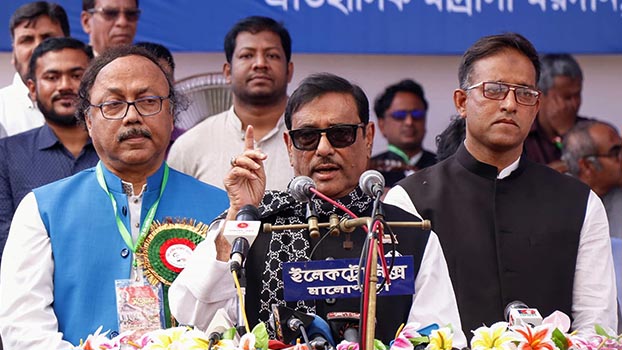 General Secretary of Awami League and Minister of Road Transport and Bridges Obaidul Quader said, ‘BNP will not get an escape route if Awami League takes a stand on the streets of Dhaka. During the period of BNP, Awami League leaders and workers could not stay at home. Currently, BNP leaders and workers do politics sitting in the AC room. Not this day, there are more days. Wait, what kind of movement and what is Awami League will explain. Prepare for the game. Obaidul Quader said this in the speech of the chief guest at the tri-annual conference of Tangail District Awami League on Monday afternoon. Obaidul Quader addressed BNP Secretary General Mirza Fakhrul Islam Alamgir and said, “With bed sheets, pots and pans. Or a week ago, people go to the BNP conference. Barisal’s kirtankhola is a crowd of people. Earlier, he flew a bag of money in Rangpur. When the common and low-income people are suffering in this crisis of the country, you are blowing money! You have no value for common people. BNP needs the peacock throne of power. Therefore, BNP is inciting the people to overthrow the government. Awami League general secretary said, “you say that one million people will attend the grand rally in Dhaka. But you do not have this power. If Sheikh Hasina calls, no outsider will be needed. At the call of Sheikh Hasina, lakhs of people will be present from the streets of Dhaka. We will be able to gather millions of people. Obaidul Quader said that the game will be played in December. The movement will be played against. All conspiracies will be played against. Addressing the BNP, he said, ‘They could not take out a procession even in 13 days in 13 years, they will do the agitation again. Victory march with Khaleda Zia! Tarek Zia has gone abroad on bond. Who will lead the BNP movement? Awami League is not a party to escape. Escape party BNP. Where to escape now? This day is not the day, there are more days. The conference was opened by Awami League presidium member Md. Abdur Razzaq. Awami League Presidium Member Abdur Rahman, Member of Parliament Shahjahan Khan, Presidium Member Kamrul Islam, Joint General Secretary Mahbub-ul Alam Hanif, and Education Minister Dipu Mani were special guests at the conference. Awami League organizing secretary Mirza Azam was the main speaker. The special speakers were Publicity and Publication Affairs Secretary Abdus Sobhan Golap, Organizing Secretary SM Kamal Hossain, Education, Human Resource Affairs Secretary Shamsun Nahar, and others. District Awami League President Fazlur Rahman Khan Farooq presided over by General Secretary Joaherul Islam. In the end, Agriculture Minister Abdur Razzak announced the committee for three years keeping the current president Fazlur Rahman Khan and general secretary Joaherul Islam in their positions.

The issue of launching library is in the education policy: Dipu Moni