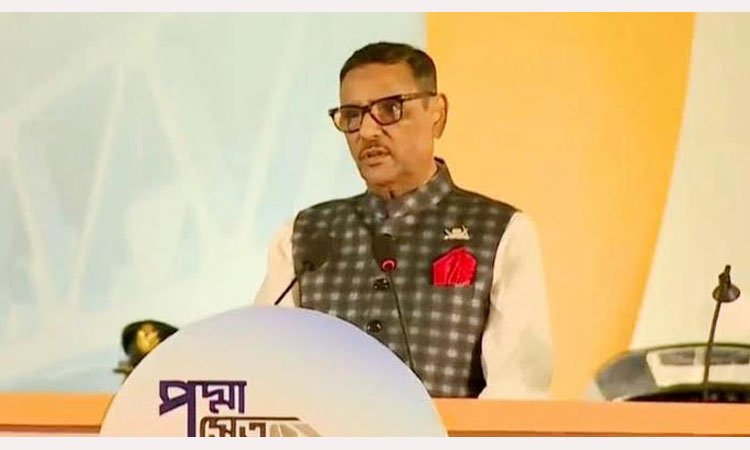 The game will be played on the call of Sheikh Hasina next December. BNP is jumping more. Fouling more. The people of Bangladesh will show a red card against them. Obaidul Quader, General Secretary of the party and Minister of Road Transport and Bridges, said these things at the Triennial Conference of Brahmanbaria District Awami League on Saturday afternoon. He inaugurated the conference organized at Niaz Muhammad Stadium in the city. Taking the slogan of ‘Khela Hobe’ discussed in the recent politics of the country, Obaidul Quader said, ‘BNP leader Mirza Fakhrul Islam Alamgir is doing this business. MPs and ministers are taking sacks of money to make money. It will be played, it will be played, it will be played against trade. Obaidul Quader said that Tarek Rahman has smuggled thousands of crores of taka to Switch Bank. Money launderer Tariq Rahman testified in FBI court from America. Tariq Rahman has secretly pledged that he will not do politics again. Referring to former President Ziaur Rahman as the ‘mastermind’ (main planner) of August 15 and BNP Acting Chairperson Tarek Rahman as the mastermind of August 21, Obaidul Quader said that if Ziaur Rahman had not been involved in Bangabandhu’s murder, then this murder would not have happened. Ziaur Rahman rewarded Bangabandhu’s killers with jobs abroad. The fifth amendment was passed to stop the trial of Bangabandhu’s murder. Khandaker Mushtaq Ahmad was his commander. Central Awami League presidium member Sheikh Fazulal Karim Salim was the chief guest at the conference. Central Awami League joint general secretary Mahbub ul Alam Hanif was the main speaker. Al Mamun Sarkar, General Secretary of Brahmanbaria District Awami League and newly elected Chairman of Zilla Parishad presided over by Ram Ubaidul Moktadir Chowdhury, Member of Parliament of Brahmanbaria-3 (Sadar and Vijaynagar) Constituency and President of District Awami League. Awami League presidium member Kamrul Islam, organizational secretary Abu Saeed Al Mahmud, science and technology affairs secretary Md. Abdus Sabur, Relief, and Social Welfare Secretary Sujit Roy Nandi, Central Committee Members of Parliament Parveen Zaman and Marina Jahan, Member of Parliament Arma Dutta, Member of Parliament for Brahmanbaria-1 Constituency BM Farhadul Islam, Member of Parliament for Brahmanbaria-5 Constituency Mohammad Ebadul Karim and Brahmanbaria- Member of Parliament for 6 seats AB Tajul Islam.

There will be no famine in Bangladesh: Prime Minister Sheikh Hasina