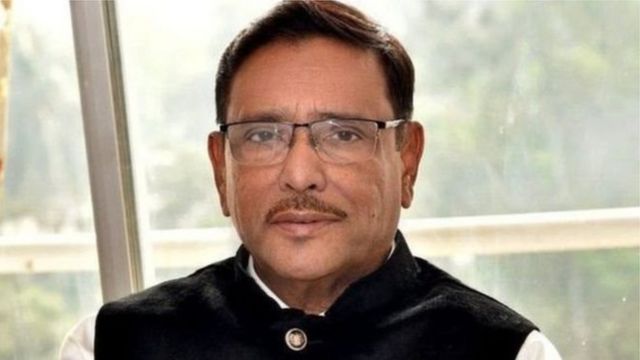 Addressing BNP, Awami League General Secretary and Bridges Minister Obaidul Quader said, ‘The liberation war started from Gazipur. Come here and see how many people there are. And you cannot gather people in some districts even if you lie there with pillows for three days. In Sylhet there is no human flood, there is the Surma river flood. And the turbulent waves of the Bay of Bengal in Gazipur. He said these things in his address as the chief guest at the triennial conference of the Metropolitan Awami League at the historic Rajbari Maidan in Gazipur city on Saturday. At the end of Obaidul Quader’s speech, he announced a two-member committee of the Metropolitan Awami League. In this, the current president Azmat Ulla Khan was made the president, and the acting general secretary Ataullah Mandal was made the general secretary. Obaidul Quader said, “BNP wants to give up power and leave.” If there is a change in power, there must be an election. There is no opportunity to change power without elections. Complaining in our name will not be profitable. The way elections are held in all countries of the world, will be the same in our country. Obaidul Quader alleged that BNP has started arson and terrorism again. He said, “Sheikh Hasina’s inauguration plaque has been burnt at Kanchpur Bridge. These will be played against fire-terror. get ready Obaidul Quader said about the development of the country, “Our Padma Bridge was built with our own money.” It is now a considerable irritation in the mind of BNP. Wearing black glasses, they cannot see anything. Speaking as a special guest at the conference, Awami League presidium member and former minister Kamrul Islam said, Bangladesh will never have a caretaker government. The next election will be held under Sheikh Hasina. BNP will lose itself if it does not come to the election. Criticizing the research institute Center for Governance Studies (CGS), Kamrul Islam said that they are giving opportunities to various embassies to interfere in internal affairs. They want a government like Zia-Ershad. But that will never happen. Azmat Ulla Khan, the president of Metropolitan Awami League, was the special guest at the conference, another member of the presidium of the party, and Agriculture Minister Md. Abdur Razzaq. Awami League organizing secretary Mirza Azam was the main speaker. Acting General Secretary of Nagar Awami League, Ataullah Mandal, also spoke by Liberation War Affairs Minister AKM Mozammel Haque, Member of Parliament Bir Freedom Fighter Abdus Sobhan Golap, Member of Parliament Meher Afroz Chumki, State Minister for Youth and Sports Zahid Ahsan Russell, Member of Parliament Iqbal Hossain Apu, Member of Parliament Simin Hossain Rimi, Member of Parliament Muhammad Iqbal Hossain Sabuj, reserved women MP Shamsun Nahar Bhuiyan, reserved women MP Romana Ali and other leaders and activists of Awami League from central and Gazipur districts. On the occasion of the conference, leaders and activists from different areas of the Gazipur metropolis came to the venue with banners and festoons. The Rajbari Maidan was full before the start of the conference. Later, the program was inaugurated by hoisting national and party flags and flying pigeons.

The Prime Minister is going to the Maldives today