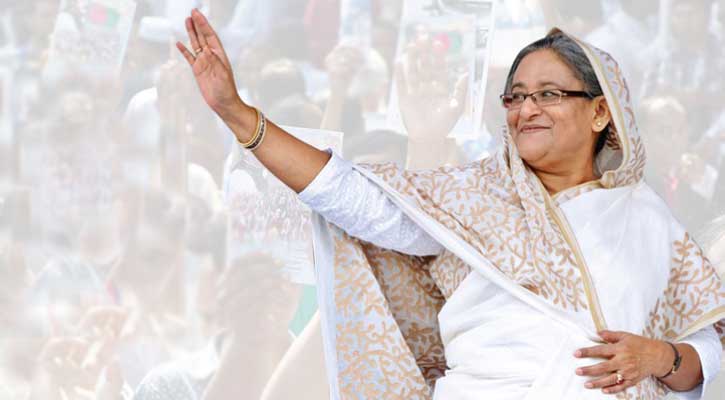 Leaders and activists of Jessore Awami League are spending a busy time around Prime Minister Sheikh Hasina’s public meeting. The party wants to hold a bigger gathering than any recent BNP rally. That is why preparations are being made to turn the entire city into a rallying point. Awami League leaders and workers are campaigning intending to gather hundreds of thousands of people. Prime Minister and Awami League President Sheikh Hasina will address a public meeting at Shams-ul Huda Stadium in Jessore on November 24. Awami League leaders say that the message of the Prime Minister’s arrival in Jessore has created excitement among the leaders and workers of not only Jessore but the entire southern region. Last five years ago, Sheikh Hasina addressed the election rally at Jessore Eidgah ground on December 31, 2017. Meanwhile, new hope has arisen among the common people of Jessore around the Prime Minister’s visit. Representatives of the civil society are on the streets with a set of demands, including a 500-bed hospital in Jessore Medical College and the establishment of a culture university in Sagardani named after the great poet Michael Madhusudan Dutta, solving the waterlogging problem in Bhavadah. Regarding these demands, they are already holding programs like the human chain, and rallies, and handing out memorandums to attract the attention of the Prime Minister. Several central leaders and ministers of the Awami League have already visited the stadium several times ahead of the public meeting. Top officials of police and administration are also staying in Jessore to make the gathering place safe and undisturbed. To ensure the location of hundreds of thousands of people, the gallery on the west side of Shams-ul Huda Stadium has been broken and connected to the grounds of Abdur Razzak Municipal College and a part of the municipal park. Shaheen Chakladar, general secretary of the district Awami League and Member of Parliament, told Prothom Alo about the preparations for the public meeting. 60 to 70 thousand people attended the BNP rally in Khulna. Preparations have been made for a public meeting of eight lakh people in Jessore. For five years the leaders and activists of Jessore did not get close to the leader. The leaders and workers who love the leader will join the public meeting in Jessore with unbridled enthusiasm to meet the leader. Shahin Chakladar said that at least 50 thousand people have been prepared to come in 800 buses from Keshabpur Upazila alone, and leaders and workers will also come from the surrounding districts. The gathering place will not hold so many people. Preparations are being made to install 10 large LED screens so that people can see and hear the leader’s speech directly. Those boards will be installed in the government Michael Madhusudan college campus and Edgar grounds. According to party sources, miking and campaigning have already started on the occasion of public meetings. Arches have been constructed on various roads in the city. In front of the public meeting, various leaders across the city started their campaigns. Leaders have hung banners, festoons, and posters welcoming the Prime Minister and the party chief in various areas including Daratana Mor, Bangabandhu Sheikh Mujibur Rahman, and Garibshah Road. Jillur Rahman, Member Secretary of Jessore Medical College Hospital Implementation Struggle Committee said, Jessore has many members. They often do not reach the Prime Minister properly in Dhaka. For example, 12 years ago there was a medical college but no hospital. As a result, students have to go to the district hospital five kilometers away for practical education. If there was a medical college hospital, 75 percent of patient pressure would have been reduced in Sadar Hospital. They want to bring to the attention of the Prime Minister various problems and demands surrounding this visit.

BNP is not able to gather people in the rally: Obaidul Quader in Gazipur

Country cannot be handed over to big thieves and terrorists of Hawa Bhavan: Information Minister

VAT to be reduced on edible oil import

“Soldiers of 2041” are ready to forward Bangladesh: PM