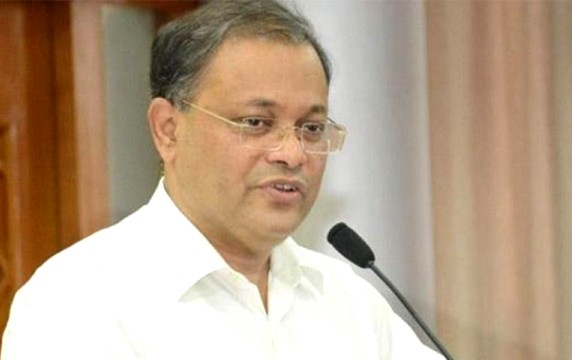 Information and Broadcasting Minister Hasan Mahmud said, Tariq Rahman means, champion of corruption five times in a row, son of corruption. The country cannot be handed over to the biggest thieves and terrorists in Hawa Bhavan. Hashan Mahmud said these things at the triennial conference of the Chittagong North District Farmers League at Chittagong Engineers Institution on Saturday afternoon. This information was informed in the press release of the Ministry of Information. Hashan Mahmud said, “BNP Secretary General Mirza Fakhrul Islam said that if they can bid farewell to Awami League, then they will form a government under the leadership of Tariq Rahman.” And BNP leader Asadul Haque Dulu has said that if they come to power, they will remove the skin from the backs of all people. We cannot hand over the country to those who want to remove the skin from people’s backs, so everyone should unite. Criticizing BNP at the event, the information minister said, “In winter, like winter birds come from Siberia and eat rice from us and get fat and leave again, BNPO is like winter birds.” No news for five years, when the election comes, it will come like a winter bird. The birds of this winter cannot be given another chance. Information Minister said BNP has started terrorist activities again. They are the enemy of the people, the enemy of the country, they must be resisted at all levels. Those who used to collect money from the people by building wind towers, those who installed poles without providing electricity, those who attacked with grenades on August 1st, those who killed SM Kibria, Ahsan Ullah Master, Manjurul Imam, those who created Bangla Brothers all over the country and killed people by hanging them from trees. The information minister said that people have united behind Sheikh Hasina because of the changes in the country, so this change is not tolerated by BNP. Alleging that BNP is gathering terrorists all over the country, he said, yesterday they burnt the nameplate of Kanchpur Bridge; That is, they (BNP) have started terrorist activities again. The information minister said, ‘Whatever Fakhrul-Rizvi-Gayeshwar Babura says, a few days ago the Vice President of the World Bank came and met the Prime Minister and said that the progress made by Bangladesh is an example for the world, wonderful progress. President of Chittagong North District Farmers League Nazrul Islam Chowdhury inaugurated the conference under the chairmanship of Farmers League President Sameer Chand. Shafiqul Islam, General Secretary of North District presented the organizational report. Chittagong North District Awami League President MA Salam, General Secretary Sheikh Ataur Rahman, Central Farmers League leader Akbar Ali Chowdhury, Rezaul Karim Reza, and others were special guests at the conference. Earlier this morning, Hashan Mahmud visited Chittagong’s historical polo ground along with party leaders. Prime Minister Sheikh Hasina will address a public meeting in this field on December 4. In response to the questions of the journalists, while visiting the field, the information minister said, ‘Insha Allah there will be a gathering of lakhs of people in Chittagong. As you know, BNP held a rally here a few days ago. One-third of the field was excluded, and a stage was made. Of the remaining two halves, half was empty. As they said, people were not really like that. Hasan Mahmud said, there is a community hall in the corner of the polo ground, there used to be a variety show. A few more people attended the BNP rally than the variety show. Jabbar’s Bali Khel in Chittagong also has three times more people than BNP’s rally. Chittagong South District Awami League President Moslem Uddin Ahmed, District Council Chairman ATM Payrul Islam, Metropolitan Awami League President Mahtab Uddin Chowdhury, General Secretary and Former Mayor AJM Nashir Uddin, North District President MA Salam, General Secretary Sheikh Ataur Rahman. Others were present at this time.

Who is doing what? Sheikh Hasina has all the information, no one will be exempted: Obaidul Quader to the activists

Law enforcement agencies are not involved in forced disappearance: Kamal