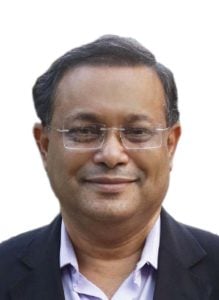 Awami League leaders and activists will be on guard in Dhaka’s wards around the BNP rally on December 10, said Information and Broadcasting Minister and Awami League Joint General Secretary Hasan Mahmud. He gave this information during an exchange of views with journalists in the meeting room of the Ministry of Information and Broadcasting at the secretariat on Wednesday afternoon. Hashan Mahmud said the recent inactivity of the militant group is connected with the special situation that BNP is trying to create in the name of a rally across the country. They have various plans including target killing-terrorism. In response to the question of whether there will be a transport strike on December 10 or not, Hasan Mahmud said, ‘Look, Bus Truck Owners Association, these are private organizations. All party leaders are here. All parties have bus truck owners’ associations and labor organizations also have all parties. This is their matter, we do not know this matter, we have no hand in it.’ Regarding the rally of BNP, this joint general secretary of Awami League said, ‘They will hold a huge rally. Some say 10 million; I saw on television again yesterday that there will be 25 lakh people. But if the one-kilometer road in front of Nayapaltan (BNP office) can be closed, then 50 thousand people will hold. The purpose of Nayapaltan is to understand that the rally is already a flop. About this rally of BNP, he also said, “Do we block any main road and hold a rally! The rallies they held in other places were held in the field. They are saying that there is no such ground in Dhaka city, not even in Suhrawardy Udyan. I don’t see anywhere except Purbachal. Because there is no other place for 10-20 lakh people except Purbachal. The information minister said, “Why they want to do it in front of Nayapaltan is easily understandable. They want to create the kind of chaos that Hefazat Islam tried to create. To create a special situation in the country, cartels want to carry out vandalism, arson, and attacks on people’s property. The people of Bangladesh, the people of Dhaka city will not allow that to happen. BNP leaders are talking about their December 10 rally in Dhaka just like ‘Khali Kolsi Baje Beshi’, Hasan Mahmud commented. In response to a question regarding various comments of BNP leaders regarding the December 10 rally, Hashan Mahmud said, “BNP leaders including Mirza Fakhrul Sahib have been demanding the resignation of the government for 12-13 years. They are in one movement. And we know and understand how much will happen on December 10. Because they have held rallies all over the country.’ The rallies that they gave at the divisional level did not have any reflection in the rallies. We haven’t had as many people at any of our affiliate conferences in recent times as we have at their conventions. The minister remarked that the same people are roaming all over Bangladesh in BNP rallies like showing the same baby crocodile again and again. He said, ‘People have gone to Barisal by launch from Chittagong to hold a rally. Sylhet’s rally has left Comilla, Dhaka, and Mymensingh too. We know and understand what will happen in Dhaka. However, the government has given them full support so that they can hold a rally. That is why they have been able to hold rallies without any problems. Hasan Mahmud said, “And when we were in the opposition party when they were in power, they attacked our rally with grenades, bombed, injured many people, I was injured in the grenade attack on August 21. He said, but in their rally, not a single cracker burst till today. The government has made perfect security arrangements, so they can hold such a rally without any hindrance.

Who is doing what? Sheikh Hasina has all the information, no one will be exempted: Obaidul Quader to the activists

Vote on the boat to win, I’ll give you more than you want