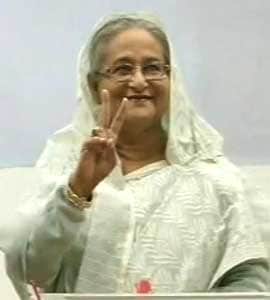 Prime Minister Sheikh Hasina has asked the people of Jessore to vote for the boat brand in the upcoming elections. He asked everyone to vote in Awami League’s public meeting at Shams-ul Huda Stadium in Jessore city today. Sheikh Hasina said, ‘Our government will do whatever is necessary for the renovation of Shams-ul Huda Stadium. I want your prayers and love. At the same time, I want to promise you that you will vote for us again in the next election. I will give you more than what you want. At this time, the crowd raised their hands and supported the words of the Prime Minister. Awami League president Sheikh Hasina said, “Many people are now criticizing the reserve.” Many people ask, where did the reserve go? We have not wasted our reserves. I have used it for the welfare of people. I had to buy fuel oil, I bought food grains. I have implemented various projects. Corona vaccination and medical care have been confirmed. We have to spend from the reserve for these works. Our government has increased the reserves to a record amount. And no government could increase the reserves. We are doing all the work keeping a sufficient reserve in hand. There is no problem with reserves, we have enough money in all our banks. There will be no problem in the future. Prime Minister After five years in Jessore, the lively leaders and activists around the public meeting are marching towards the meeting place to join the public meeting of Prime Minister Sheikh Hasina. Jessore, on November 24, the Prime Minister mentioned that she was happy to hold a public meeting in Jessore. My grandfather Sheikh Zahurul Haque is lying on the ground here. He used to work in Jessore. When my mother was three years old, she died. At that time the communication system was so bad that it was not possible to come here. My grandfather is buried here. IT will be parked here in memory of my Nana. Sheikh Hasina said, “During Khaleda Zia’s time, 40 percent of people in the country lived below the poverty line. We have narrowed it down to 20. Poor people were 25 percent. We have reduced it to 10 parts. Because the Awami League government works for the people. The prime minister said about the solution to Jessore’s Bhabdah problem, ‘The first project to solve Bhabdah waterlogging has been implemented. Now I have taken up the second project. If this project is implemented, the waterlogging of one lakh 20 thousand hectares of land will be solved. Apart from this, the Prime Minister said that the construction of EPZ on 500 acres of land in Abhaynagar and Palli Academy named after Zahurul Haque for poverty alleviation in Manirampur is being constructed. The President of Awami League said, “There have been attempts to kill me several times. But God saved me. I feel that God saved me to serve the people. Please pray for me. Jessore district Awami League president Shahidul Islam presided over the party’s general secretary Obaidul Quader’s speech. He said, “There will be a game. The game will be against BNP. The game will be against bad governance. The game will be against Hawa Bhaban. Another name for BNP is Bangladesh Nalish Party.

Leaders and workers of A.League will be on guard in every ward on December 10: Information Minister

If people are burnt, I will not spare a single one: Prime Minister