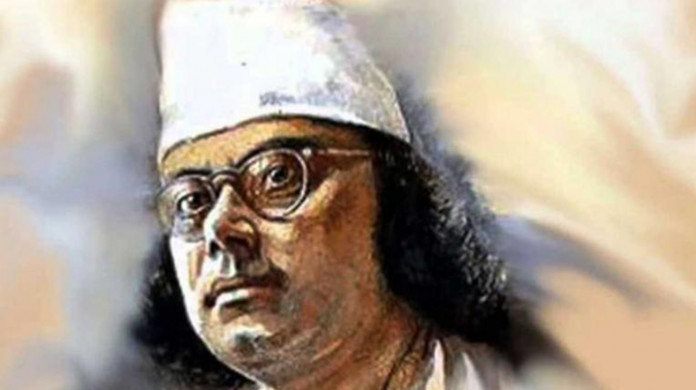 National poet Kazi Nazrul Islam’s 45th death anniversary has been celebrated with respect and love. He died at Bangabandhu Sheikh Mujib Medical University Hospital (former PG Hospital) on this day of mourning in 1976.

He was buried with state honors next to the central mosque of Dhaka University. This is where he lies in eternal sleep. Various social, cultural, political and professional organizations undertook detailed programs on the occasion of the death anniversary of the national poet. The program included wreath laying at the tomb of the poet adjacent to the Dhaka University Mosque, discussion meeting and cultural program.

On the occasion of the 45th death anniversary of the national poet Kazi Nazrul Islam, the Poet Nazrul Institute organized a virtual discussion meeting and cultural program. Speaking as the chief guest, State Minister for Culture KM Khalid said the Nazrul Institute under the Ministry of Culture is working on conducting research on Nazrul’s life, literature, music and overall contribution, collecting, preserving, publishing and disseminating his works. The state minister for culture said Kazi Shimla and Darirampur in Trishal of Mymensingh, which is associated with Nazrul Smriti, are being developed as places of interest. A Nazrul museum, library and auditorium have been set up at Bichutia Bepari Bari in Darirampur. The ‘National Poet Kazi Nazrul Islam University’ has been established at the historic Battala near this house.

Poet Nazrul Institute organizes discussion meetings and cultural programs on the occasion. Besides, a discussion meeting was organized by Bangabandhu Sheikh Mujib Medical University and a ‘Memorial Room’ was inaugurated.

National poet Kazi Nazrul Islam was born in 1308 in the village of Churulia in the Burdwan district of West Bengal. His nickname is ‘Dukhu Mia’. Father’s name is Kazi Fakir Ahmed and mother’s name is Zaheda Khatun. Although known as a rebellious poet in Bengali literature, he was simultaneously a poet, musician, novelist, storyteller, playwright, essayist, journalist, filmmaker, singer and actor. He has created a variety of ragas and has made the world of Bengali music a place of dignity.

The poems and songs of Kazi Nazrul Islam, the poet of love, rebellion, communism and awakening, have inspired the nation in the struggle against exploitation and deprivation. His songs and poems were a source of inspiration in the war of liberation. Nazrul’s poetry, songs and literary works created a renaissance in Bengali literature. He was a pioneer writer of non-communal consciousness. His writings played a major role in the development of non-communal consciousness in the national life. His poems and songs have been showing people the path of liberation from exploitation and deprivation for ages.