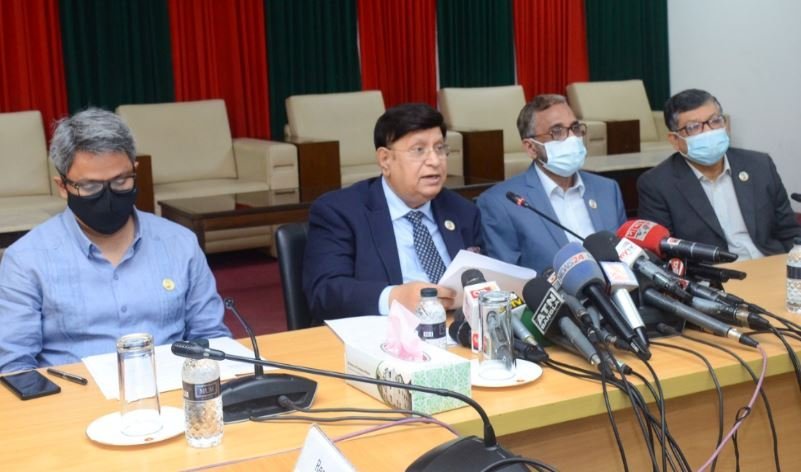 “Bangladesh, as the president of CVF, have been playing a strong role while honarouble Prime Minister will chair a ‘CVF-COP26 Leaders dialogue’ on the conference sidelines (as well),” Momen told a media briefing.

The Bangladesh premier is scheduled to leave for the UK on Sunday to join the COP26 where, Momen said, she would address the high-level meeting of COP26 on November 1 in Glasgow.

The summit’s main host British Prime Minister Boris Johnson earlier said the event must be a “turning point for humanity” while Sheikh Hasina would hold an exclusive meeting with him coinciding with the COP26 dialogue.

He said on November 1 Sheikh Hasina would also attend as the chief guest a joint meeting of CVF-Commonwealth.

The CVF that comprises 48 countries considered as most climate vulnerable nations.

According to Momen on the next day she was scheduled to join a meeting titled ‘Action and Solidarity-the critical decade’ on the British premier’s invitation and another discussion titled ‘Women and Climate’.

The Bangladesh premier’s Glasgow tour would be followed by a visit to France from November 9 to 13 to join some UN hosted programmes.

Besides, Prime Minister Sheikh Hasina will present a paper titled ‘A call for Climate Prosperity’ to the Scottish lawmakers at the Scotland Parliament.

According to the premier’s schedule from November 3 to 8, she would visit London where deliver a speech to the British lawmakers at West Minister Place marking the 50-year anniversary of Bangladesh.

Sheikh Hasina is expected to unveil newly published books on classified documents on Bangabandhu under the auspices of Bangladesh High Commission in London.

On November 9, Bangladesh premier will go to Paris from London for a five-day visit to participate different programme of UNESCO.

During her Paris visit, Prime Minister Sheikh Hasina is likely to hold bilateral meeting with the French president and prime minister.

Momen said it is expected that after the bilateral meeting between Bangladesh Prime Minister and French president numbers of Memorandum of Understanding (MoU) and Letter of Intent will be signed between the two countries.

Momen said it is a pride for the entire nation that UNSECO introduced the international award after the name of Bangabandhu marking the Birth Centenary of Father of the Nation Bangabandhu Sheikh Mujibur Rahman.

It is expected that Prime Minister Sheikh Hasina as the able successor of his father Bangabandhu will attend the ceremony in person and hand over the awards to the winners in Paris.

The Premier will highlight the universal ideals of Father of the Nation Bangabandhu Sheikh Mujibur Rahman as well as her own vision on the importance of universal, quality and science-based education and healthy and inclusive culture in achieving the UN Sustainable Development Goals (SDG).

Besides, Prime Minister Sheikh Hasina is likely to hold a bilateral meeting with UNESCO Director-General Audrey Azoulay during her stay in Paris.

All will be benefited with digitalization of TV cable network: Hasan

Obaidul Quader congratulated the countrymen on behalf of A.League in the new year

Russia refocusing on Donbas but no offensive yet: Pentagon

Save money, produce food: PM urges all, warns of tough days ahead