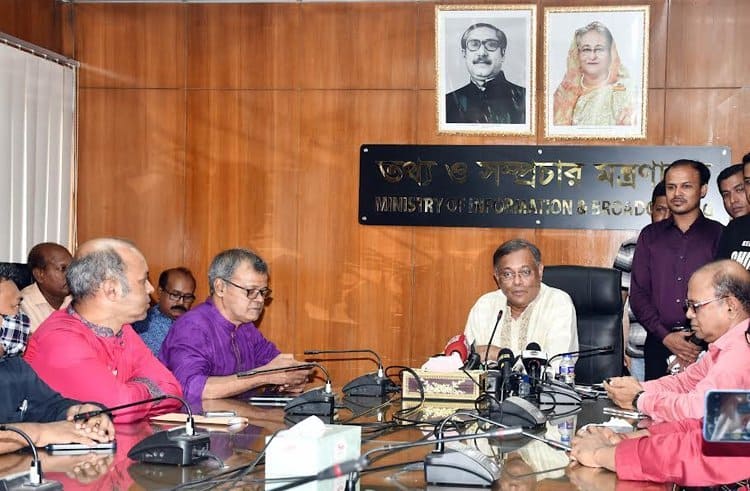 Information and Broadcasting Minister Dr. Hasan Mahmud yesterday said the BNP itself has already fallen down while pushing the government.

“The base of the Awami League government is so much strong and you all know that if anyone pushes any strong wall then he or she falls down. The base of Awami League is deeply rooted. In fact, BNP itself has already fallen while pushing Awami League. So, if they push again, they will fall down again, even the head might get cracked,” he said.

The minister said this while replying to a query from reporters over a comment of BNP leaders at the meeting room of his ministry at Secretariat in the capital.

Later, Hasan expressed views with the leaders of Dhaka Union of Journalists (DUJ).

Replying to another query, the minister said the whole world is facing power and energy crisis. Power supply has never been stopped in Germany after the World War II, he said, adding, but, this time people in Germany have also been asked to save electricity and power supply for heating water has been stopped in many cities there.

He said SMS has been sent to the US citizens urging all to save power. The same call has been made in France too, said Hasan, also Awami League joint general secretary.

He said two hours load shedding has taken place at New South Wales and Sydney in Australia and the Prime Minister of Spain urged its citizens not to wear ties. The prices of fuel for power generation have increased while the price of gas has increased ten times, he added.

He said the whole world is rationing the electricity. The same steps have been taken in the country like in the developed world and ‘we hope that the situation will no longer exit after December’, he added.

Hasan said BNP understands the situation. But the party (BNP) has no scope to talk about this as they were not able to supply electricity to the masses, he added.

Currently, the minister said, BNP is holding processions with hurricane lamps which have two meanings . . . one, it matches with Muslim League whose electoral symbol is hurricane lamp and, two, hurricane lamps can be transformed into patrol bombs anytime.

About the ninth wage board award, Hasan said his ministry is working to solve the issue.

Money cannot be wasted in the name of project: Tajul